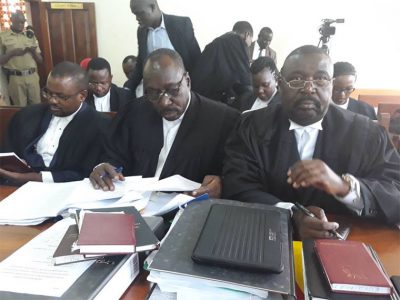 The government legal team led by the Attorney General Mwesigwa Rukutana has been probed at-length over emerging information that Parliaments decision to entrench the Presidential term limits is not reflected in the Constitutional Amendment Act 2017.

Parliament in December last year passed the Constitution (Amendment) (No. 2) Bill, 2017, that among others lifted the presidential age limits and restored the Presidential terms limits that had to be entrenched in accordance with the Budadiri West MP, Nathan Nandala Mafabi’s proposal.

The Court has been probing into the matter since Tuesday when Clerk to Parliament, Jane Kibirige was cross-examined on the fact that the Nandala’s amendment seemed to have not been extracted from the official record of Parliament-the Hansard for inclusion in the amended Constitution.

This was unearthed following The Acting Director of Civil Litigation, Christine Kaahwa’s submission on claiming that article 260 of the constitution was not amended prompting the Deputy Chief Justice, Alfonse Owiny-Dollo and his 4 other judges to disagree with her.

The Deputy Attorney General who is leading the respondent’s side later admitted that the Nandala motion had been adopted by Parliament but said it would be inserted after a referendum is held.

Counsels are giving their final submissions in the ongoing Constitutional Court hearing over the challenged constitutional amendment act No.2 2017 that lifted the presidential age limit.