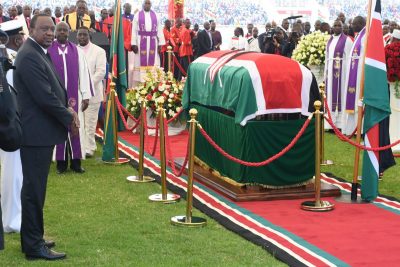 The state funeral of Kenya’s former President Daniel Arap Moi has ended at Nyayo National Stadium in Nairobi and his body returned to the mortuary at Lee Funeral Home overnight then be flown to Moi’s home in Kabarak where he will be buried on Wednesday February 12, 2020.

Mourners will congregate at Kabarak School near the former president’s home, where only few close family members will be allowed inside but Thousands will be following the burial proceedings through giant television screens at Nakuru County’s Afraha Stadium.

President Uhuru Kenyatta has told mourners at the state funeral of former President Daniel Arap Moi that “he is not mourning but celebrating the achievements of the fallen icon a statesman and a giant in history of Kenya and African in general.

He said Mzee Moi was a pan African, a peace lover and a democratic leader who sow the transition of Kenya to multiparty system and agreed to retire in 2002 in peace.

Ugandan President Yoweri Museveni has paid tribute to the late Moi praising him as a “patriot” who was keen on the East African Federation, the proposed union of six countries in the region to form a single state.

President Paul Kagame of Rwanda, Salva Kiir of South Sudan said Mzee Moi’ “played key a role in East Africa as an icon of peace, particularly the independence and freedom” of South Sudan in 2011 and economic prosperity of all member states, one of the founders of IGAD and a committed leader for all.

Kenya’s Deputy President William Ruto described Moi as a “genuine” person who wanted what was “best for the country “similarly the Kenya’s opposition politician Raila Odinga who has called Moi a”great leader” said the late had “human weaknesses” basing on his imprisonment for six years when he suspected him to have been behind the 1982 coup attempt against Moi’s regime.

Posted: Tuesday 11th February 2020 09:54:29 PM
Next:
The Church in AMECEA plans for sustainability for the local church.