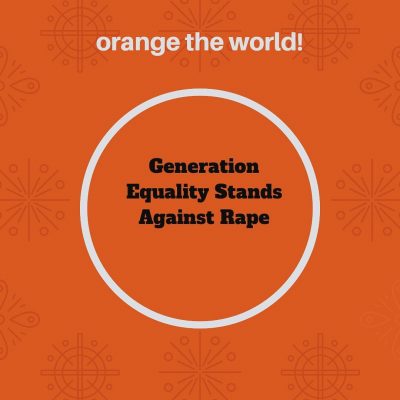 The Media has been urged to prioritise efforts against Gender based violence against women because it’s a serious challenge to the prosperity of nations.

Cord named the UNiTE campaign of the 16 Days of Activism against Gender-Based Violence that started on 25 November to 10 December is running under the theme, “Orange the World: Generation Equality Stands against Rape!” is an International recognized day spearheaded by the Women’s Global Leadership Institute in 1991 to Eliminate of Violence against Women, and girls.

The 2019 GDV week comes as The Uganda Police Force Annual report for 2018 showed that violence against women remains a persistent crime in Uganda’s communities with 15,366 defilement cases reported in 2018 compared to 14,985 cases in 2017. 1,580 cases of rape were reported in 2018 compared to 1,335 cases in 2017. A total of 286 cases of trafficking in persons were reported the majority of the victims were women.

The UN women programme on violence against women facilitated by Evelyn Letiyo during a media engagement at Hotel Africana said power imbalance is the main causal factor facilitated by poverty, bad religious and cultural beliefs and gender stereo types that level a woman as nobody in society especially in developing countries like Uganda.

Letiyo emphasised collective action through media sensitization, public gatherings and all stakeholders to appreciate the negative impact right from home to the workplaces.

Previous:
Men should embrace freed HIV/AIDS testing to control the scourge by 2030