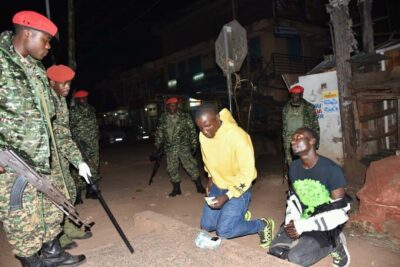 Security teams arrested 577 people across the country during the two days’ of sporadic protests that were sparked off by the arrest of Presidential candidate, Robert Ssentamu Kyagulanyi alias Bobi Wine.

The protests started on Wednesday in various parts of the country after police commanded by former Kampala Metropolitan Police Commander, Frank Mwesigwa, arrested Kyagulanyi from his campaign venue in Luuka district. According to the Police, Kyagulanyi defied Standard Operating Procedures –SOPs intended to contain the spread of Coronavirus Disease- COVID-19.

The Electoral Commission and Ministry of Health banned mass gatherings at the time when the country is struggling to contain the disease which has so far claimed more than 150 lives. Gatherings are now restricted to not more than 200 people.

But Kyagulanyi, the presidential flagbearer for National Unity Platform-NUP has been accused of holding massive campaign rallies. After his arrest, protests started in more than 20 districts of Uganda.

Police Spokesperson Fred Enanga says that the biggest number of the suspects were picked from Kampala Metropolitan area that covers the areas of Kampala City, Wakiso and Mukono districts. In greater Kampala alone, police and military arrested 321 suspects on Wednesday and Thursday.

Enanga added that the protests that rocked the entire country were not impromptu but were well coordinated by members of the National Unity Platform in different parts of the country, who distributed stones and car tiers to rioters before the spark. He attributes the Fracas to fake news that was circulated on social media claiming that Kyagulanyi had been executed by police soon after his arrest.

“The protests came after bloggers posted fake news that Hon Kyagulanyi had been killed in Busoga. All indicators reveal these were not impromptu but well-coordinated protests,” Enanga said.

Previous:
EC called to have full control over the election.