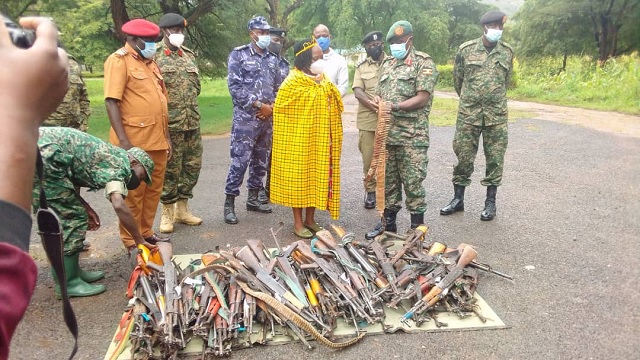 The joint security forces have recovered six more guns bringing to 40 of the total number of illegal guns and 192 rounds of ammunition recovered since the launch of the cordon and search operations in Karamoja 10 days ago.

The six guns were recovered separately on Wednesday afternoon from Loptuk Sub County in Moroto and Nakapiripirit Districts.

Brig. Gen. David Mugisha, the Second in Command of the 3rd Infantry Division says such separate recoveries and previous ones are because of the positive energy and tireless efforts by the Commanders, intelligence and troops to pacify the Sub-region.

Commissioner of Police, Elias Kasirabo the Anti-Stock Theft Unit Commandant stresses that the forces will maintain and sustain the operational tempo.

He adds that 898 suspects are still in custody and 22 pieces of armed forces uniforms were also recovered.

Posted: Friday 27th May 2022 09:11:47 AM
Next:
Security agencies commit to stop violations against Journalist