SECAM statement at the closure of 18th plenary assembly 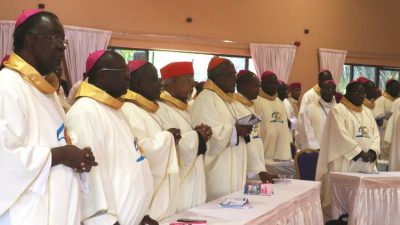 The SECAM 18th Plenary and Golden Jubilee celebrations has produced a final message under the theme; “That they may know Christ and have life in abundance” (Jn 17:3; 10:10).

Under Jubilee, a Time of Thanksgiving, the Bishops thanked God for the goodness bestowed on Africa, that was described as “the new homeland of Christ” (Pope Paul VI); that is strengthened by the word of God and the sacraments, guided by the Holy Spirit.

They credited the pilgrimage of Pope Paul VI to Kampala in memory of the Martyrs of Uganda in 1969,  that culminated into the starting of SECAM and now Pope Francis at the 50th anniversary of SECAM who has encouraged the African Catholic Bishops to be of valuable service to the local churches.

Under The Jubilee, a time of communion, the Bishops noted with appreciation the joy a true communion of Christian communities, and above all The Golden Jubilee of SECAM is a commitment to the service of reconciliation, justice and peace which promotes communion and pastoral solidarity through where the Catholic Church will stand together against: ideological colonization, land grabbing, political and democratic destabilization, human trafficking, terrorism and arms trafficking among other challenges.

On the Jubilee, a Time of Hope, the Bishops stressed support to the families that is founded on the union of man and woman from who children and vocations come from.

Children and the youth, the Bishops noted that must be given special attention and quality Christian education to make them effective witnesses to Christ as well as the Women whose roles of education and evangelization in the Church are irreplaceable.

Through the socio-pastoral instruments such as Caritas, Justice and Peace Commissions engaged in the promotion of integral human development, SECAM continues to commit itself to the pastoral care of migrants and refugees, and to the protection of integral ecology and good governments on the African continent that will improve on the peoples wellbeing.

They prayed and entrust Africa and the mission of the Church to Mary, Queen of Africa; may St. Joseph, the Martyrs of Uganda, and all the Saints of Africa and Madagascar obtain for us a renewed zeal to follow Jesus Christ.

They urged all Africans to keep alive the momentum of the Jubilee, SECAM will issue an important document, the “Kampala Document” which will help the people of God to deepen their knowledge of Christ our Savior and make him known as the Way, the Truth and the Life.

A delegation of 320 officials that included Cardinals, Archbishops, Bishops, Priests, Religious and lay faithful took a long week meeting at the common wealth hotel in Kampala from July 21st to July 29th under the theme; “Family Church of God in Africa celebrate your Jubilee proclaim Jesus Christ your savior’

Previous:
Support to the Church should not be in terms of reciprocity- Bishop Ssemogerere says