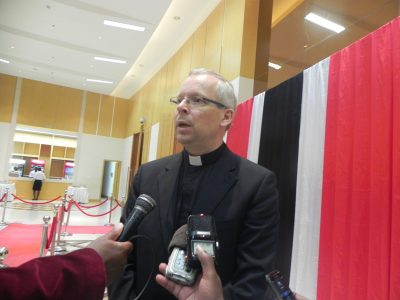 The second annual meeting of AMECEA Executive Board has taken place at Domus Clericum, Nairobi, with the Apostolic Nuncio to Kenya and South Sudan H.E. Hubertus van Megen acknowledging the contribution of the Bishops in the region for their hard work despite the difficulties they are facing.

In his sharing about the pastoral visits to different AMECEA Conferences Archbishop van Megen expressed particular concern for the Church in Eritrea, Sudan and South Sudan, saying, where the pastoralists need constant prayer and material support for those in need.

Also, South Sudan is a very difficult situation, politically. There, the Church ought to play her role but she is still very weak given the experiences of conflicts since 1957. Many Sudanese people are uprooted from their home staying in Kenya, Uganda and Ethiopia with refugee status. Obviously, the bishops, priests and Religious are also affected and suffering from the trauma.” he said.

The Church in the other countries such as Kenya where credited because of spreading its wings and playing a significant role in socio-political realities.”

The chairman for the executive board Rt. Rev. Charles Kasonde, bishop of Solwezi Diocese, took the opportunity to remind the executive board members that the meeting hinges on monitoring and evaluating the progress the association is making in implementing the resolutions which the bishops made during their 19th Plenary Assembly which took place in Addis Ababa, Ethiopia, in July 2018.

The AMECEA Executive Board which comprises of the Chairman and members from each of the conference in the region meets twice every year. During this meeting, the Board already brainstormed on the possible theme for the next Plenary Assembly which will be hosted by Tanzania Episcopal Conference in 2021.

The meeting started on October 16th  2019 and ended at the close of the week.

Previous:
Fr. E. Lwemalika was over whelmed at his silver Jubilee celebrations