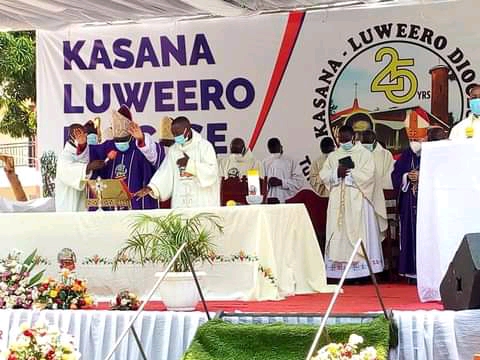 Kasana Luweero diocese, one of the four dioceses making Kampala Ecclesiastical province in Uganda has celebrated 25 years since it was instituted by now Saint Pope Paul II in 1997.

The diocese has had two Bishops who all were privileged to be appointed Archbishops of Kampala, the first being the late Archbishop Dr. Cyprian Kizito Lwanga the first Bishop of Kasana Luweero from 1997 to 2006, got a diocesan administrator Msgr. Mathias Kanyerezi until 2008 when Msgr. Paul Ssemogerere was appointed the second Bishop until January 25th 2022 when he also took the canonical possession of Kampala Archdiocese as the Archbishop.

Drawing from the Jubilee theme;” Rooted in Faith, Strive and Celebrate” His Grace Paul Ssemogerere acknowledged the contribution of the late Dr. Cyprian Kizito Lwanga, Priests and Christians for the foundation that the diocese is marking its achievements starting with growth in faith.

The diocese has got 21 parishes, 4 deaneries, a minor seminary St. Kizito Nandere and has now commissioned a multipurpose building that includes a hotel for the diocese, a printery, Schools and Hospitals among other remarkable achievements.

Archbishop Ssemogerere says the Jubilee comes during the time of lent when everyone is called upon to observe the three virtues of lent; Prayer, Fasting and Almsgiving. This emphasizes prayer right from the family and repentance to fight sin. Sin is becoming part and partial of some people which is killing faith, kindness and love for others, he said.

He said there is need for conversion, to fight Stan that is luring many into witchcraft, human sacrifice, human rights abuses,corruption, land grabbing, indecency that even caused high pregnancy rate during the lockdown induced by Covid-19 and greed for power that has also led to violation of the national laws.

Like the first motto in the diocese, have life in its fullness, John 10:10, the diocese and all faithful in Uganda must strive for exemplary life as required by God for any Christian.

He thanked the diocese for keeping him safe since 2008 until January 2022 when he left for the new appointment as the Archbishop of Kampala and urged the congregation in Kasana Luweero to work with the diocesan administrator Msgr. Francis Xavier Mpaga until the Pope at his convenience will appoint a new Bishop for the diocese.

Previous:
Pope Francis calls for Compassion in this lent season