Christmas –the birth of Jesus Christ should be born in all of us. 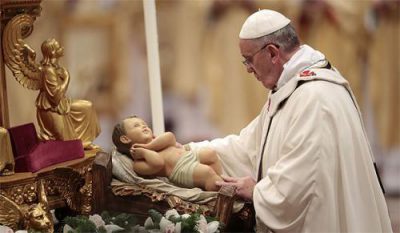 Christians world over are today celebrating Christmas the day on which Jesus Christ the saviour was born.

The faithful have filled Churches and other warship places to capacity to take part in the Eucharistic celebrations to celebrate the birth of Jesus.

Like His holiness Pope Francis in his Christmas message at St. Peter’s square where he challenged the world against consumerism and neglect to the abandoned children, the ordinaries from Uganda also emphasized assistance to those in need, justice and peace that they contribute to human dignity.

The Archbishop of Kampala Dr. Cyprian Kizito Lwanga while at St. Mary’s Cathedral Lubaga said society is troubled with violence, child abuse, family breakdown and bad governance that must be addressed starting at individual level.

Dr. Lwanga said false prophesies from those who start churches for self gains is also derailing many calling on the believers to be focused and seek God from the right faiths.

He has condemned acts of violence especially land evictions calling on government to protect communities and ensure justice for those who are suffering in the hand of land grabbers.

He congratulated people upon reaching this Christmas and conveyed Pope’s message to Ugandans following his return from Rome where a number of Bishop had gone to attend a meeting on the newly created decastry of Justice and Peace that is to be under Caritas.

Meanwhile the Archbishop of Mbarara His Grace Paul Bakyenga said the Catholic Church is committed to evangelizing the peoples and is ready to start the National Catholic Television calling on each Catholic and well-wishers to at least contribute 2000/= to start the TV at the beginning of 2019.

Uganda Episcopal Conference is planning to start a Television not later than March 2019.