Catholic Church in Uganda launches consultations for the 2023 Synod. 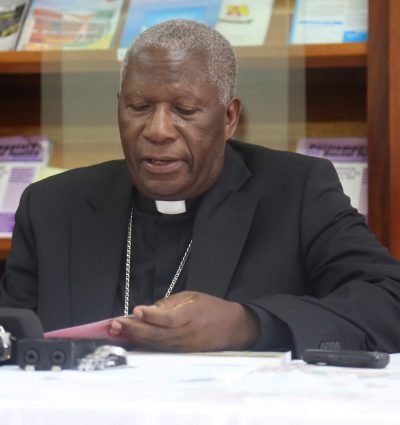 The Catholic Church world over has today launched consultations for the 16th ordinary general assembly of Bishops that will be held in October 2023 in Rome.

The 16th ordinary general assembly of the Bishops known as the Synod announced by Pope Francis on October 10, 2021 at St. Peter’s Basilica in Rome is under the theme; “For a synodal Church Communion, Participation and Mission.”

Before the synod in 2023, all Catholics right now are required to participate by presenting their views over various issues they need to see in the Catholic Church, improved, changed or introduced.

Launching the participation process in Uganda at the diocesan level the chairman Uganda Episcopal conference Rt. Rev. Bishop Joseph Antony Zziwa delivered the Papal message about the synod saying committees have been instituted that will move around the dioceses to note what Catholics want to present.

There will be three phases;

1st phase at the diocesan level that starts in October 2021 to April 2022 and will the committee members will be consulting all people of God for their views that must be presented in the synod world over.

2nd phase the Episcopal conferences will put together what has been gathered from the dioceses in what has been called a synthesis which will be sent to the general secretariat in Rome for perusal and translation into Latin the main language of the Catholic Church to get one document which will inform the synod. This is also called the Continental phase that will be done from September 2022 to September 2023

3rd phase that will start in September to October 3rd 2023 will involve among others presentation of the document for discussion in the synod called instrumentum Raboris finalized and presented to Rome for discussion starting October 2023.

Bishop Zziwa said Persons appointed to the synod consultations committee must work to the expectations of Church reaching to all people right from the grass root.

He also acknowledged the contribution of the media in Uganda in as far as dissemination of the Gospels in concerned but requested them to publicise the synodal consultations that have been launched.

Posted: Monday 18th October 2021 12:48:02 PM
Next:
The Mother General of IHMR Sr. Namusisi meets Pope Francis on her tour to the foreign missions.

Previous:
Msgr. Kyabukasa a young brother to Cardinal Wamala goes to the Lord.